Dew, I never feel like I can cross a customer off my list when they tell me “maybe.” How long do I keep calling these “maybe prospects”?  -Christina

Good question! I struggled with this myself for a very long time.

One of my mantras is that a “yes” is great, a “no” is OK, but a “maybe” is a killer. Maybe prospects are much worse than a “no” because at least with a “no” we can let it go and move on. “Maybes” leave us in a state of lingering, hoping that they will indeed say “yes,” so we continue to call them month after month (or in some cases, week after week), essentially wasting our time.

In the book How I Raised Myself from Failure to Success in Selling, Frank Bettger tells the story of how he took his career to new heights by changing his approach to calling prospects back. Frank’s story changed the way I did business forever. 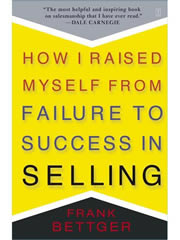 Frank talked about the importance of tracking your numbers (which everyone in sales should be doing every single day!) because you need to know how much money you make every time you pick up the phone or knock on another door (whether you get a yes or no). In Frank’s case, he found that 93% (ninety-three percent!) of his business closed in the first or second meeting and only 7% of his business closed on the third meeting or after.However, Frank found that he was spending 50% of his time working that “hard to crack” 7%. Frank realized he could virtually double his sales just by choosing to stop wasting half his time on the 7%, and refocusing it on the other 93%!

I still remember how I felt when I read that. It was an immediate wake-up call, and I vowed to change the way I did business from that moment on. I analyzed several months of my own numbers, recalling the best I could how many meetings it took for each prospect and I found my numbers to be shockingly close to Frank’s.

I made it my mission to actively seek out my “7%” and not to waste time on them. More than that, the term “Who lives in your 7%” became a catch phrase for me and something I committed to teaching my clients as well.

Here is how I recommend you continue: With every lead you call, first and foremost—track your numbers and track how many times you reach them (hopefully, you are doing this already). Once you have a few months worth of numbers to analyze, look back and see where the majority of your closed business comes from—how many times do you meet with the vast majority of your customers before they close?  Who lives in your 7%?

Then, put a plan together based on your numbers. The breaking point for you may be 8%. Or 12%. But my number is 7% (like Frank’s), so that’s what I use in my examples. And my big dividing line is two meetings. Depending on what you sell, your tipping point may happen after the 1st meeting (or maybe the 4th). 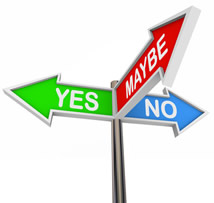 Here’s a sample action plan, based on focusing your efforts on the first two meetings. I call it the 3-touch rule: When you’re calling your prospects (or meeting with them), if you get, “not today, call me in 30 days,” flag their reminder for 30 days out and call them again. During your second conversation with them, put yourself in their shoes and push them for a commitment. If they are still completely blasé, then go ahead and cross them off your active prospect list. Now, if they are still interested (the timing is still not right), then feel free to reach out to them a third time—but your urgency has to be through the roof on this third call, this prospect is basically on “probation,” and this is their last chance.

If you aren’t moving toward a deal by this 3rd call, then cross them off your prospect list. This is going to be REALLY hard for some of you (I know it was for me)—but commit yourself.

Now, as you know, I am a big fan of follow-up, so of course, I don’t completely forget about these maybe prospects. I’ll still add them to my email list (and hopefully, I have gotten them to follow me on Twitter, like my Facebook page, and connect with me on LinkedIn). So I will continue to keep my name in front of them. I will even put them in my tickler system, so they will still get on occasional call from me (every six months or so), just to see how things are going and if things have changed. But this is no longer an “active” prospect for me—they are mentally and physically off my “hot” list and my immediate dial schedule, clearing up room for a new (better!) prospect.

*Please pay attention! A “yes, but not today,” does not always mean maybe. A “yes, but not today,” could simply mean that they are not ready to list their house but they do indeed want to use you, their expiration day isn’t until May of 2013 and they want to include you in their proposals, their office is buying the space next door and need your telecommunication services when they are further along in the remodel, or they are still trying to save more for the down payment of the 2012 F150 that they fell in love with last month. This is a yes in my book and you best stay in front of them until they’re ready to move forward.

Track. Your. Numbers. If you find yourself “dialing” on a list of recycled numbers hoping to find a “yes” in your haystack of “maybes,” then it is likely time to spend a few days building up your lead list again. You’re probably running out of people to call and recycling old leads is your only option. Get out of that scarcity mentality and get back into your abundance mentality. Get some fresh leads to call on and you won’t feel so consumed with your “maybes”!

Categories: Attitude Adjustments, Dew Recommends, Sales Tips
Disclosure of Material Connection: Some of the links in the post above are “affiliate links.” This means if you click on the link and purchase the item, I will receive an affiliate commission. However, I only recommend products and services that I use and believe in. I am disclosing this in accordance with the Federal Trade Commission’s 16 CFR, Part 255: “Guides Concerning the Use of Endorsements and Testimonials in Advertising.”