Recently, one of my coaching clients (Frank) told me that there was too much drama in his office and he couldn’t concentrate. He had reached the point of questioning whether or not he wanted to stay at the company or look for a new job. 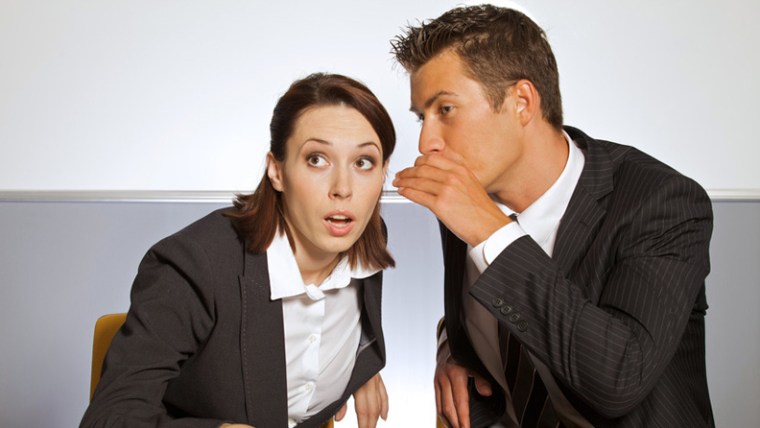 Eventually, Frank heard about this from other people, but being the “I don’t deal with office drama” type, continued to say nothing. This toxic situation actually started to effect the account executive’s performance. To top it all off, Frank felt uncomfortable asking her to do things, so he started doing her tasks himself. I told Frank that taking on her job duties was not the answer – he had to take control of the situation by addressing the gossip triangle.

Regardless of how bossy Frank may be, Betty and Charlie are in the in the wrong here. In order to stop the gossip triangle, complaints can only go one direction – up. Meaning that all complaints must be taken to a supervisor or better yet, back to the person you have an issue with. In other words, Betty should have taken her complaint to her supervisor or back to Frank. When Betty complained to Charlie (who had no control over the situation), she started the gossip triangle. When Charlie took it back to Frank, he completed it. Often times, it’s Charlie who gets the short straw because Betty gets upset at him for telling Frank and then Frank gets upset with Charlie for talking about him in the first place.

You can stop the gossip triangle before it ever starts: when someone comes to you with gossip, be the bigger person, stop their story before they finish, and tell them to take the issue back to their supervisor or the person who wronged them. How can you tell when comments are just gossip? Gossip is any negative comment made to someone who can’t do anything about it.

I am familiar with organizations that have a ZERO tolerance policy for gossip. First offense is a warning; second offense is a lost job. I love that policy! Imagine how much office drama would go away if that were implemented where you work.

Sometimes, my coaching sessions that don’t have anything to do with sales turn out to be my favorites. Having Frank see that he could be back in control was awesome. He went back to Charlie and said, “Hey man, I don’t want you to be put in the middle of this. If you ever hear anyone talking about me again, will you tell them to come talk to me about it?”

Charlie’s response: “Sure! I’m sorry I didn’t do that in the first place.”

In the end, everybody won. They are all communicating better and Betty understands Frank’s need for perfection in a new way.

If Frank can do it, you can too – stop the gossip triangle and put an end to your office drama. Do your part to make a gossip free workplace a reality!

Until next time – go sell some stuff!

Categories: Attitude Adjustments, Time Management Techniques
Disclosure of Material Connection: Some of the links in the post above are “affiliate links.” This means if you click on the link and purchase the item, I will receive an affiliate commission. However, I only recommend products and services that I use and believe in. I am disclosing this in accordance with the Federal Trade Commission’s 16 CFR, Part 255: “Guides Concerning the Use of Endorsements and Testimonials in Advertising.”