I was 35 years old when I started exercising. That’s not to say I never exercised at all before then, but I wasn’t in any way what I would consider an “athlete” either. 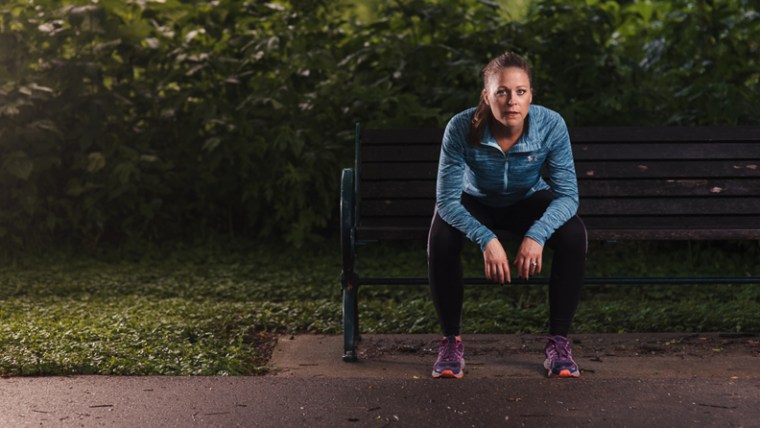 A friend of ours came to Nashville to run a marathon and stayed with us. It was the process of watching him prepare the night before that made me realize, “That looks fun!”—not the running part necessarily, but preparing to do something you really love that will challenge you. What came next truly changed my life.

The very next day, after watching him run the marathon, I went out for my first run. When starting out, I used the “Couch to 5k” app to get myself moving. That’s when I found my love for running.

I am certain that your mental health directly connects to your physical health. When you are expending energy and burning calories, you’re also—in a way—processing the muck of daily life. I have heard many times that the pavement is one of the best therapists you’ll ever meet in your life, and I wholeheartedly believe that to be true.

You don’t have to be lifting heavy weights or running five miles every day. It’s about getting moving—and then continuing to move!

Recently a coaching client shared with me, “Dew, I just don’t have the same motivation I used to have. I don’t feel like I’m performing at my peak or living my best life.” One of the things we realized after talking things through is that he had become complacent and lazy in his exercise.

He used to be a five-days-a-week exerciser, and now he was lucky if he was even getting out and walking one day a week. And what a difference that made in his life! Exercise is incredibly important, and your emotional health can be severely impacted by your physical activity (or lack thereof).

These days, I make it a priority to move at least five miles a day by running, jogging, or walking. Doing this has seriously changed everything in my life. It made me realize that taking care of yourself physically matters just as much as taking care of yourself mentally and financially. Fitness is inarguably a cornerstone of a balanced life.

The Department of Health & Human Services recommends that adults get moderate aerobic activity for 150 minutes a week—that is 30 minutes a day for five days per week. You should also be doing some sort of strength training at least two times a week. When you look at the numbers, it’s clear that exercising regularly doesn’t mean you’re doing strenuous activity all the time; you’re just continuing to move.

If you’re saying, “But I don’t have 30 extra minutes, Dew!” I don’t want to hear it. Instead, think about this: thirty minutes is only two percent of your day. TWO. MEASLY. PERCENT. So when you say you don’t have time to exercise, what you’re really saying is that you can’t carve out two percent of your day to dedicate to taking care of the only body you’re ever going to have. Seems silly when you look at it that way, right?

If you’re not willing to find time to exercise, you have to be aware that you’re going to be affected negatively by it. If you feel like you can’t make it work because you have children or pets, it’s time to chuck that excuse. You can take all your kids and pets for a walk in the morning or after work in the evening—they need exercise too!

Every single one of us has the power to open our front door and just WALK. In addition to the exercise, you need that Vitamin D. You should be outside in the sun for 10 minutes a day, exposing your body and mind to the simple benefits of being outdoors. Who doesn’t have 10 minutes a day?!

I can’t begin to describe the benefits I have received from exercising regularly, and I wasn’t an exerciser for most of my adult life. Now, seven years later, it’s a huge part of who I am. I travel a ton for my work, but even when I’m on the road, I still get out every morning for a walk.

There is so much to see in this world of ours! If you’re in need of some inspiration to get you started, check out my Instagram page, where I love documenting my walks and travels.