As I write this, we’re still in the first quarter of the year. There’s a chance you may have already jumped ship on one of your goals, but it’s not too late to get back on track and meet your goals. And one of my favorite ways to get motivated and stay engaged is a little friendly competition. 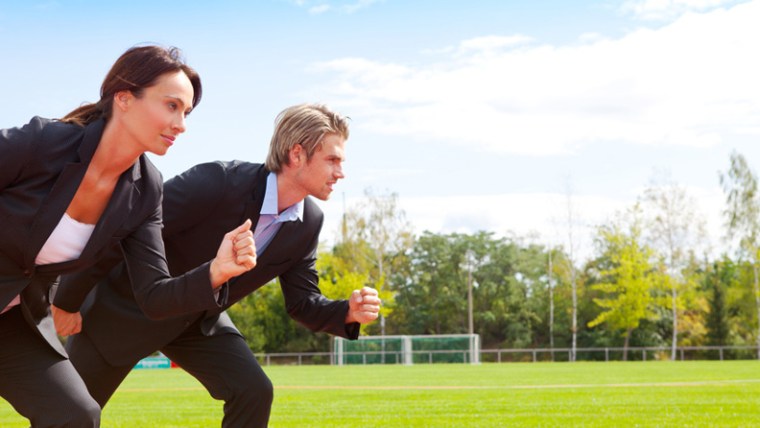 Like a lot of salespeople, I have a competitive spirit. But the craziest competition I ever won had nothing to do with business: it was a “friendly” wager with my husband, Shane, when he bet me I couldn’t do 1,000 crunches in one day.

It started as a random discussion about the power of routines. He told me how some legendary football player stayed in fantastic shape without lifting weights; he just had a crazy routine of something like 1,000 push-ups and 1,000 sit-ups every day.

I suppose his laughter (and his confidence) actually made a lot of sense. Shane was an athlete in high school, and at the time of our bet, he could easily do 50 push-ups. I, on the other hand, had never been much into sports or fitness—in fact, I could barely do 50 crunches in a row without taking a break.

The laughter from Shane (and the doubt implied in it) was exactly what I needed. We mapped out some ground rules and “shook on it” to make it official.

In the next few months, I learned a lot about myself—and Shane learned a valuable lesson, too:

Although he started way ahead of me, by the time Shane realized how serious I was, I could do as many as he could, and within a couple of months, I had passed him. By the time he got up to 600 push-ups a day, I had hit my goal and was doing 1,000 crunches daily. (And no one was more shocked than I was!)

In the end, there really was no loser—we both got into great shape and had a lot of fun pushing each other.

My favorite part of “winning” is the reward—even when it’s just bragging rights. Now, I’m not one to gloat (OK, that’s a lie—I love gloating!), but make sure you celebrate your wins with love. Don’t be a poor loser (or even worse—a sorry winner). In the case of me beating Shane in our contest (I did mention that I won, right?), my prize comes anytime I want to remind him of the day he doubted my ability to do 1,000 crunches.

Meet Your Goals With a Contest of Your Own

So maybe an informal contest could help you meet that goal you think is out of reach? Find a like-minded co-worker or a friend in the same industry and set up a contest. If you have a competitive spirit, a little good-natured trash talk via email or text could be the boost you need to make an extra call or finish the week strong.

Categories: Attitude Adjustments, Time Management Techniques
Disclosure of Material Connection: Some of the links in the post above are “affiliate links.” This means if you click on the link and purchase the item, I will receive an affiliate commission. However, I only recommend products and services that I use and believe in. I am disclosing this in accordance with the Federal Trade Commission’s 16 CFR, Part 255: “Guides Concerning the Use of Endorsements and Testimonials in Advertising.”